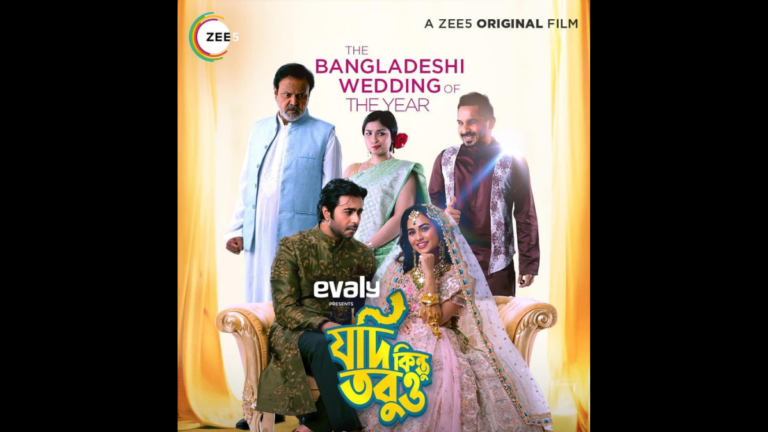 Jodi Kintu Tobuo starts off with Preety, all decked up, crying in the car until she comes across the bloodied Abir lying on the side of the road. We then go back to their college time when they had met – Abir had fallen in love with Preety the moment he laid eyes on her.

Anyway, Abir turns out to be your typical stalker who goes around annoying Preety even when she’s not interested. It’s super fricking cringy, to say the least, especially when he says that he is in love with her – mind you, at this point, they haven’t even had a proper conversation with each other. But, well, as with Bengali movies in general, Preety loves it that Abir falls hard for her sneezing bout.

However, even if the falling in love part is the easy thing to do, committing to it is difficult. Abir has difficulty settling down with Preety. Both of their families want them to get married, and although Preety seems to be ready, Abir is not.

Jodi Kintu Tobuo’s plot isn’t different from your average love story where the boy is commitment-phobic and comes to a realization after losing his love. It’s nothing new and it is very annoying to look at the glorification of the trope in this century. Also, a grown-ass man pushing his issues on his girlfriend is just such a red flag. Showing it off as a tiny problem does not do any justice to the issues that will invariably creep up later on. I am also shocked at how little Abir and Preety communicate – his ego issues, too, are absolutely uncool.

I hate that Jodi Kintu Tobuo extended its plot with meaningless things that either don’t matter or add to your displeasure towards Abir. He’s a protagonist no one would like to have in their lives – he’s jealous, selfish and deceitful and is drowning in his escapist mentality. And although you know how the movie will end, you’re still irritated at the outcome. Why? Because you don’t want Preety to end up with Abir. Because he isn’t a great guy and needs loads of therapy to get over his issues. He’s an unreliable protagonist who guilt-trips his girlfriend whom he ghosted on.

Preety is a bit better, however, in the end, you don’t see the fiery passion, it all comes down to a hug. Would you want to marry the boyfriend who stands you up on the day of your engagement? No, you wouldn’t. But that’s exactly what Preety does. Was it expected? Yes. Was it disappointing? Also, yes.

Jodi Kintu Tobuo, however, looks gorgeous. The production quality is great and the leads, along with the sets, look really pretty. Nusraat Faria Mazhar, especially, is shining in every shot she’s in and is one of the redeeming aspects of the movie. Another good thing is her parents, who, unlike your typical rom-com parents, don’t force their decisions on their daughter. It’s a refreshing change, and although, yes, her father does tell Abir that he’ll shoot him if he hurts her daughter, I don’t blame him.

The music is not great and is mostly forgettable, along with the background score. Jodi Kintu Tobuo features good acting though, and Ziaul Faruq Apurba and Nusraat Faria Mazhar are both great, as is their chemistry. Sometimes their dialogue delivery, however, does sound a bit awkward which might make you feel a little out of it. Additionally, Tariq Anam Khan plays the role of a disgruntled father looking out for his daughter well.

Jodi Kintu Tobuo is your typical rom-com surrounding a wedding and a flaky boyfriend. It’s not new and neither is the ending – it’s very much expected. However, standing in this century, you really want either the protagonists or the outcome to be better than this.