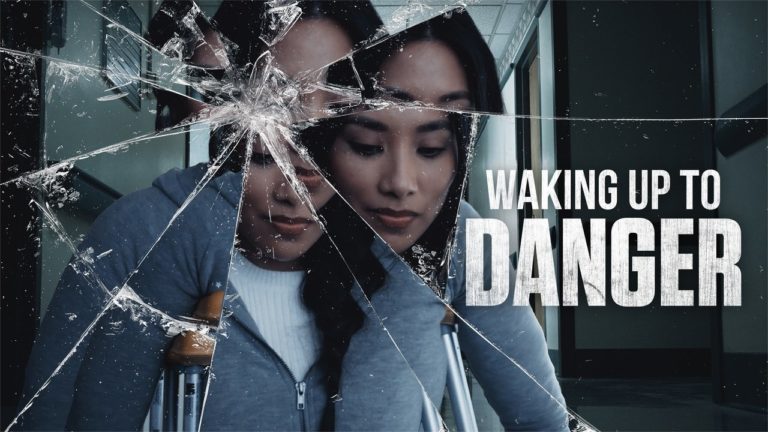 Waking Up To Danger is a thriller movie on Lifetime starring Donna Benedicto, Erin Boyes, and Hamza Fouad in lead roles.

A young mother attempts to pick up the pieces after a horrible accident damages her memory, but she soon begins to suspect that her husband’s indiscretions are what caused her suffering and her whole family might still be in danger.

– Waking Up To Danger review does not contain spoilers –

Waking Up To Danger opens with a dream wherein a creepy person is waking down with a candle in their hand. They proceed to cut up a picture of a family and burns the portion that has their mother.

Anyway, we then see the family – there’s some problem between the couple and for some reason, Arianna, our protagonist, is a real estate agent. The reason I say “for some reason” is because, in movies such as these, where the woman is surely going to get into some trouble, there’s always something about showing houses to random strangers. What else do these movies have in common? They are mostly pretty bad. But don’t worry, this never comes up later.

Lifetime’s Waking Up To Danger has a distinctly “Lifetime” feel. Although the production quality is good, things don’t look like straight-up trash, but there’s a person slinking around in black overalls doing random stuff. From the get-go, it looks funky and funny and I couldn’t take the movie seriously because of it.

Moving on, she gets into a car accident because of this mysterious person and she suffers memory loss. Does the plot remind you of something, though? Ah, Secret Obsessions. That train-wreck. Anyway, Waking Up To Danger gives away too many spoilers from the first minute and from the synopsis regarding who could be the black overall person. It’s shocking how much information that synopsis has!

At the same time though, the movie takes so much time to get to the point. We watch too many montages of her trying to walk and other miscellaneous things. So, the thrill aspect is lost. And you know what also takes away from anything remotely thrilling – the fact that Waking Up To Danger gives everything away within the first half an hour.

So, for the next one hour, you wonder what you’re expected to watch because you already know everything. It’s not thrilling if you know who’s going to try and murder you, you know? You’re just left watching the “murderer” being all creepy and doing creepy things but they don’t surprise you since you’ve already been told this. Additionally, the flashback scenes are just so bright! It feels like I am watching something taking place in heaven. The last chase sequence is absolutely goofy and feels like three kids playing in the backyard. But then again, when there’s no tension to begin with there’s not much you can take away either.

The acting is surreal. There are moments that all of these people are believable in their roles, but at other times (most times) it’s just so over-the-top that it’s cringy. Well, except the grandma. She’s cool.

Summing up: Waking Up To Danger

Waking Up To Danger is a confusing movie. You aren’t sure what you’re supposed to be scared of, or what’s so thrilling. You’re just stuck watching an hour of flashbacks when you already know exactly what happened in Arianna’s life before the accident. So, when the movie peels the layers open, you’re already sitting there with a peeled onion. It’s frustrating at best.

Watch Waking Up To Danger here.

Also Read: Netflix’s You Are My Spring Episode 9 Recap: Kiss and Tell!