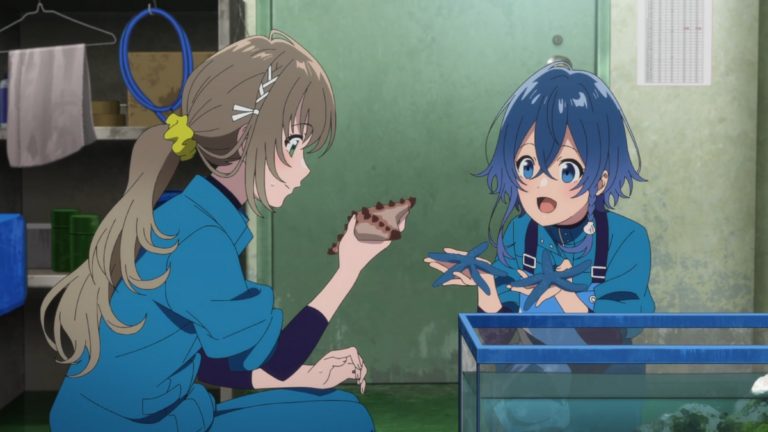 Come, swim with me in the beautiful waters of a Southern Japanese county as we explore The Aquatope on White Sand Episode 4 and the events that transpired during it.

The Aquatope on White Sand is the latest anime by the Anime Studio P.A. Works, previously known for producing critically and commercially acclaimed anime like Angel Beats and Another. Toshiya Shinohara directs the series, a director whose career so far has been intrinsically linked with P.A. works, having previously directed Irozuku Sekai no Ashita kara and Nagi no Asu kara for the studio before. It is an original series by P.A. works, which means it is not based on a previously existing property, such as a Manga or a Light Novel.

If you want to know how I felt about the third episode of the season, or if you want to catch up on it, check out my review of it here.

There were some gorgeous frames in this episode, especially those which feature the sky. The animation quality of this show is stellar and make this anime worth watching on its own. Everything else that we get is a bonus that we should appreciate more than we already do.

The sound and music aren’t very far behind, either. Each episode features at least one great tune, some even multiple. Whether it is uplifting or melancholy, The Aquatope on White Sand Episode 4 nails every piece of sound that it has. Just the wind blowing through the town feels like an old friend that we got to meet after a long time, welcoming and pleasant. There aren’t enough good things I can say about this. You absolutely need to check the show out for yourself.

What makes us work so hard? What drives us towards the goals we want to achieve? Even if we have everything, what makes us want to better ourselves even more? Those are the questions The Aquatope on White Sand Episode 4 sets out to answer. Was it successful in doing so?

Well, it’s complicated. The show is getting really consistent with its plot framing. Each episode follows a straightforward format- Kukuru works hard to save the Gama Gama aquarium, and Fuuka tries to overcome or discover some part of herself. That’s not a bad thing by any means, and the show knows what it wants to be and where the story is supposed to go. What does happen is that the episodes feel a little more empty each time this is repeated.

The slow-moving plot is not a problem for me, as I quite enjoy taking in the excellent universe that P.A. Works has created and basking in its glory. That sort of thing does become a problem for people who have trouble enjoying slice-of-life anyway, and it is fixable with some tiny changes. It is a nitpick since the problem seems to have already been addressed in the teaser for the next episode, but it is still something.

The side characters have all developed tangible personalities, and I can finally distinguish between Kukuru’s two best friends now. Yay me! The Aquatope on White Sand Episode 4 had everything that has now become a staple of the show. Great art, cute girls, incredible marine life, and the aesthetic all made their presence known, and I enjoyed every second of my time watching it.

If you liked this review, you would also like our review of the next episode in the series, available right here!