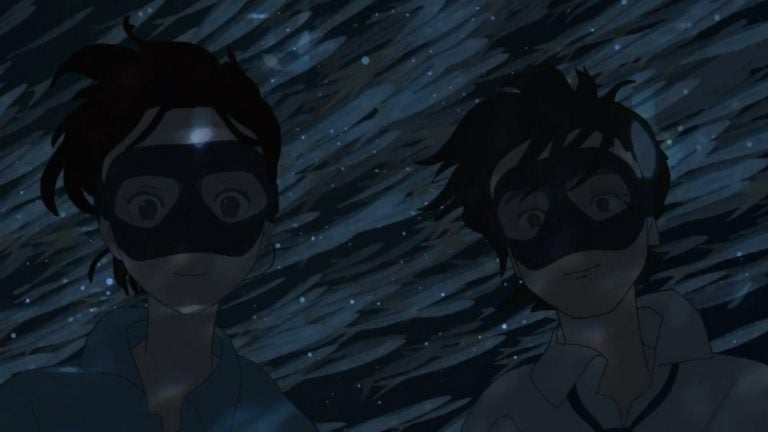 How much weirder can Sonny Boy get? The answer is very weird. Sonny Boy Episode 5 was a return to the creepily weird format that we know and love, rather than the crazy weirdness of Episode 4. Let’s see how the episode fared in this review.

If you would like to refresh your memory about the happenings inside Episode 4, or if you’re new to the series and Episode 4 is the first one you decided to watch, you can check out my review of Episode 4 of Sonny Boy here!

The farther along you get in Sonny Boy, the less you know about the show. Every episode raises more questions than it could answer, and Sonny Boy Episode 5 wasn’t an exception. From the start of an episode, the show bombards you with development and exposition so deep that you have to pause and think if you maybe skipped an episode or two. That doesn’t come as a surprise anymore since it has now been an entire month of watching this show, but it gets a bit grating after a while.

Sonny Boy Episode 5 begins with the main characters and Rajdhani solving a Pac-man puzzle with real mice? Which then somehow turns into a computer mouse to help them “solve” a world? And it somehow did and didn’t make sense at the same time? This show is weird, and I’m now having some trouble deciding if it is the right or a wrong kind of weird.

The overall plot of Sonny Boy Episode 5 was okay, but I don’t know how many infighting and baseless accusations I can take anymore. This episode was fine, Madhouse, but you’re on thin ice. I want something different other than the “Explore, Accuse, Infodump, Explore Again” formula you have got going on there. I need some more substance in the show, and most of all, I need answers.

We only really need to talk about two characters here, but I have a lot to say about one of them, so that should suffice. Let’s talk about the protagonist of Sonny Boy, Nagara. He is the typical hikikomori or shut-in anime protagonist, who has conveniently been bestowed with a great superpower. The twist that Sonny Boy introduces is that he doesn’t like his powers, and he just might be responsible for the predicament his entire class is in.

So the show expects you to feel sorry for him, and in some instances, you do, but a lot of times, it feels unearned. He just hasn’t earned the sympathy yet, and he isn’t entertaining enough to make you tune into Sonny Boy every week. I’m sure there will be some development that will make him more interesting than he is, but it hasn’t happened yet.

The other character is Asakaze, the clone of Nagara. He has somehow got a vital role in the series, and I couldn’t tell you why or how that is for the life of me. He and Aki-Sensei have a thing going now, and they are turning the group against Nagara. That is fine, but it doesn’t make sense to make the kids this stupid. It is undeniable that Nagara can’t control his powers, and even if he did, by trusting Aki-Sensei, they are all just dooming themselves to a world they can’t escape anyways. What’s the point in blaming Nagara? It doesn’t make much sense beyond creating a conflict.

There were some absolutely gorgeous frames in Sonny Boy Episode 5, especially the entire sequence of Nagara and Nozomi swimming together. This episode was the most beautiful in the series so far, and it felt like the animators were flexing their skills to us. Well, Mission Accomplished.

The music also shone as bright as the light Nozomi sees in every world. The track that plays when Nagara runs away from everyone is breathtaking, and I would like to own a copy. This might have just saved this episode from a mediocre review.

Confusing yet beautiful, unnerving, yet gorgeous, Sonny Boy Episode 5 was a mixture of many things, which turned out to be a bit like Rachel’s cake from friends. Full of good stuff, just not necessarily going along well with each other. The show needs to either quicken its pace or give us some answers soon. It feels like it is coasting right now, and I don’t appreciate it that much.