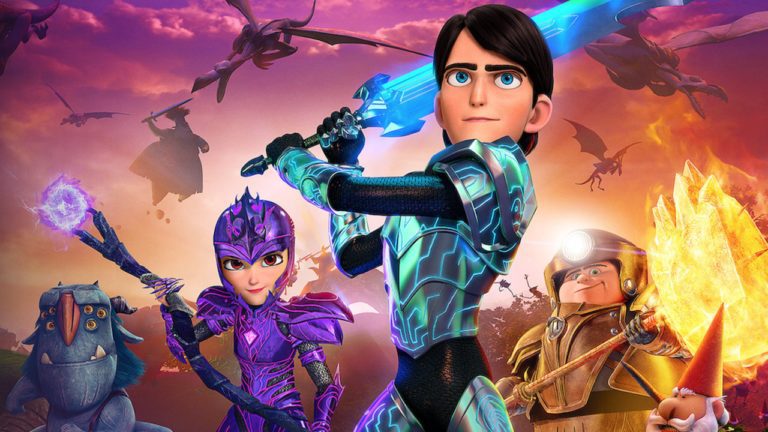 The Netflix synopsis for Trollhunters: Rise of the Titans reads:

Heroes from “Trollhunters,” “3Below” and “Wizards” join forces to fight a shadowy enemy threatening to take over their worlds – and reset Earth itself.

For those who have not watched the previous three chapters, this video from Netflix might help:

– Trollhunters: Rise of the Titans review does not contain spoilers –

Trollhunters: Rise of the Titans starts with a fight on a subway train which turns into a kidnapping and then things race on through different situations in order to save life as we know it on Earth. I was hooked to the movie from the first minute. Keep in mind, this is for kids aged 7 and up. Thus, there aren’t many complex scenarios or incidents that are difficult or questionable.

However, even with its kiddie themes, I think Trollhunters: Rise of the Titans does well at holding on to some mystery. Kids are going to love it especially because of how bright and colourful it is. Indeed, every scene is bursting with colour and the animation is wonderful. It’s beautiful to look at and is crystal clear.

The characters are all interesting, however, the movie focuses more on Jim than anyone else. That’s understandable since he is the protagonist. He, thus, gets the most arc out of the lot. In spite of that, you can’t help but get attached to the others as well, especially the female characters including Nari, Aja and Claire. I also loved Archie, and although the cat is mostly a background character, it’s still hella cute. Also, AAARRRGGHH!!! is too cute!

Also Read: Battle Game in 5 Seconds Episode 2 Review: Does It Get Any Better?

Surprisingly, in the short time I got to know the characters in Trollhunters: Rise of the Titans, the death of some characters really made an impact. Of course, it’s all kid-safe without as much as a single drop of blood. However, the scenes themselves were really sad. It goes to show that the movie really tried to make us care for the characters, even if you are watching the movie without any information regarding the previous chapters.

There are some funny moments and comedic respite from the incessant action scenes. Trollhunters: Rise of the Titans does a good job at keeping these moments innocent and quite simple and they made me smile. Granted, they won’t make you roll on the floor laughing, but I don’t think that’s what the movie was going for either.

Also Read: The Aquatope on White Sand Episode 2 Review: Getting Wet is Part of My Job

Coming to the Titans, they look neat. They each have individual powers and are huge (as Titans should be). The fight between Bellroc and Gun Robot is reminiscing of Godzilla vs Kong.

The ending fight sequence between Jim and Bellroc is neat as well. The heroic moment when he finally becomes what he is destined to be is quite the dramatic moment and fits well with the overall vibe of the movie. Bellroc’s design and character, too, are great and makes for a great antagonist.

Summing up: Trollhunters: Rise of the Titans

Overall, Trollhunters: Rise of the Titans is a movie that everyone can enjoy regardless of age. There are elements that keep it interesting and fun and the action sequences are done very well. If you’re looking for an innocent and entertaining movie full of magic and action, then this is not a bad bet.

Trollhunters: Rise of the Titans is streaming on Netflix.