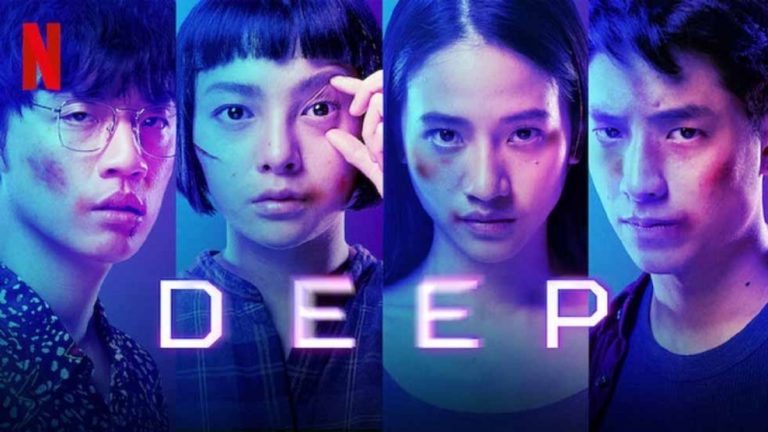 Deep (2021) is a recently released Thai science fiction movie. It has a total run time of about an hour and 40 minutes. It is directed by Sita Likitvanichkul, Jetarin Ratanaserikiat, and Apirak Samudkidpisan.

Four insomniac med school students are lured into a neuroscience experiment that spirals out of control and must find a way out before it’s too late.

Deep (2021) follows the story of four med school students with very different lives, who bond over a suspicious science experiment. It stars Panisara Rikulsurakan as Jane, Kay Lertsittichai as Win, Supanaree Sutavijitvong as Cin and Krit Jeerapattananuwong as Peach.

Jane is a quiet and studious girl who is always top of her class. She is the sole caretaker for her sister and her old grandmother. Her financial conditions are worsening day by day. Due to all of these factors, Jane is unable to sleep for long periods of time.

Win is a troubled student who spends most of his time at parties and basketball matches. He keeps himself awake for days on end to keep track of his social life. Even while being a medical student, he rarely finds himself time enough to actually study.

Cin is the most popular girl in their university. She is also a famous social media influencer with over ten thousand followers. She was brilliant during her high school years and faced tremendous family pressure to pursue medicine even though she wanted to study communication. Because of the pressures of medical school and her families constant nagging, she finds herself relying on sleep pills to actually fall asleep

Peach is a gamer, who spends most of his time immersed in a virtual world. In real life, he has almost no friends. Although, virtually he has over a thousand gamer friends. He stays up late playing video games all night.

All of them are very different from each other and are lured in by a brain experiment on insomniacs. Since all of them are in need of the extra money, and think they are suited for the job, they agree. However, as the experiment progresses, things seem to spiral out of control.

I have to be honest. Going into Deep (2021), I did not expect the movie to be as good as it finally turned out to be. Each twist and turn was just as unpredictable as the next, and they just kept coming. I knew next to nothing about the Thai film industry, and Deep (2021) was beyond anything I expected it to be like. From the cinematography techniques, the editing, and sound design to the acting and direction, this movie was definitely a pleasant surprise.

Even the graphic design for the start credits was extremely well done. They had a psychedelic theme to them, with vibrant colours and swirling patterns that perfectly suited the film. As much as I liked the movie as a whole, I must point out that the first half was much more promising than the second.

The second half, though it isn’t bad, is rather boisterous when compare to the first half. Even though the plot only progresses minimally during the first half, it sucked me right into the film, which is the characteristic trademark of a good Science Fiction thriller.

Although this movie was such a treat and beyond a doubt, one of the better psychological thrillers I have seen, it definitely won’t be one to get tremendous media attention. While Deep (2021) isn’t anywhere near the genius of Shutter Island, Black Swan, and its likes, the film exceeded my expectations tremendously. Maybe because the film was truly that great, or because my expectations were low, to begin with. That’s for you to decide.