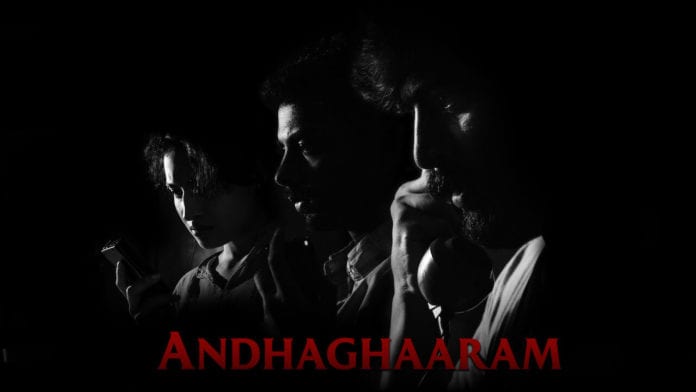 Andhaghaaram is a Tamil-language supernatural thriller film written and directed by V. Vignarajan in his directorial debut. The film stars Arjun Das, Vinoth Kishan and Kumar Natarajan in lead roles.

The delicate line that exists when you have supernatural and thriller at the same time in a film keeps it from turning lunatic and idiotic. Andhaghaaram prances around the line throughout its 2 hours 50-minute runtime – a huge amount of time for a thriller film. However, there’s only so much idea that you can conjure up when your runtime is that big, so failure at some point or the other sometimes feels imminent.

Andhaghaaram is the story of Vinod, Selvam and Dr Indran. Three people with vastly different lives have their stories entwined with each other in the most twisted of ways. Will they be able to untangle this knot?

The plot of the Andhaghaaram is unique and for well over 2 hours, you’ll be relatively hooked to its narrative. The three stories intertwine with each other pretty well, and there’s a general air of mystery and creepiness lurking in every corner. The film starts off with a black and white montage that brilliantly sets the tone for the upcoming runtime.

It holds on to this tone and surprisingly, first time writer and directed V. Vignarajan added not one jumpscare in this atmospheric thriller. That’s an achievement in itself. However, that does not mean that you wouldn’t be sitting wide-eyed wondering what’s going on for the most part. Andhaghaaram’s tension and intrigue lie in the way the story flows and is edited and keeps you entertained throughout.

In addition to the story, cinematographer A M Edwin Sakay, and music composer Pradeep Kumar have added leaps and bounds towards building the atmosphere of this film. The dark and brooding sets, especially Vinod’s home, are a treat to the eyes. Add to that the background score and you have a very creepy and thrilling film that takes you on a ride.

Arjun Das as Vinod, Vinoth Kishan as Selvam and Kumar Natarajan as Dr Indran are great in their roles, especially Kishan. All three characters are fleshed out beautifully and have enough depth for you to relate and care about them. Be it Arjun Das’s angry young man, Vinoth Kishan’s blind librarian Selvam or Kumar Natarajan’s very creepy Dr Indran – there’s a mix of a lot of emotions with just three people. While Kishan shines with his very believable portrayal of a visually-impaired man, Das jumps between moments of horrifying anger and frustration to straight-out sobbing, oftentimes one after the other. All of them showcase emotional ranges that bind Andhaghaaram together.

However, even with so much going for it, the film ends on a rather silly and disappointing note. The way the creators decided to sum up this rather intense ride is laughable and boring and brings nothing new to the plate. The end 20 minutes or so is just expositional and helps the audience fill in the gap with the help of a dialogue between two of the main characters.

After that is done, we see a hilarious murder scene that is not required and which ruins the thrilling experience that this film had provided. The thread that connects these three people, although taut for the most part, loosens and ends abruptly. Additionally, 2 hours 50 minutes, no matter how thrilling of a joy ride it may be, it absolutely too much of a runtime.

Andhaghaaram, which translates to darkness, holds on to its tone and a general air of creepiness and mystery for the most of its insanely-long runtime. However, when the time comes for delivering the perfect ending, it flounders rather badly and ends on a silly and disappointing note. This isn’t to say you won’t enjoy the rest of the movie – you just won’t be served with an appetising dessert is all.

Liked our Andhaghaaram review? Read our other reviews here.

Netflix’s What Would Sophia Loren Do? Review: New Age Tribute