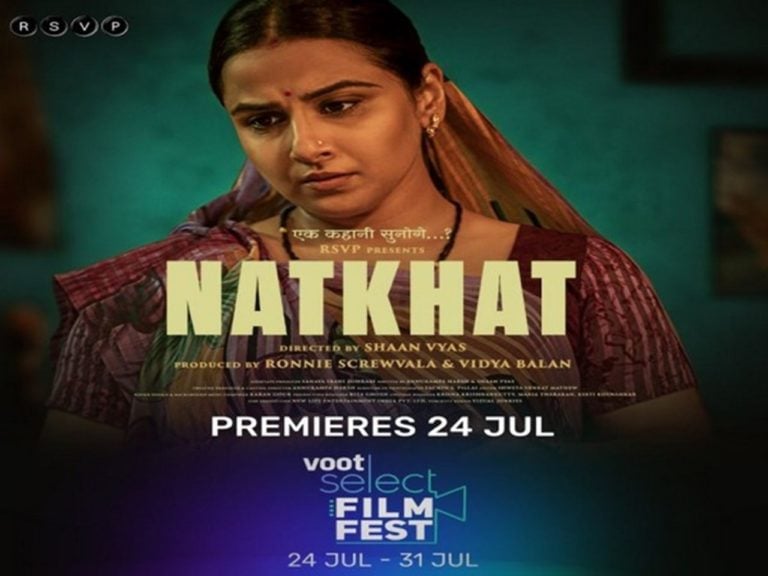 There is a mother-son story in the movie Natkhat that touches you deeply and stays with you. So here is my account of how this simple and subtle film sneaks up on you with the power to affect your inner being.

– Natkhat Review does not contain spoilers –

Leaving a Mark- Natkhat Casts A Spell Like No Other!

‘What we learn around the home, stays with us for a lifetime.’ This must have struck you at least once, right? And how true! It is yet another compilation of a true-life story, peppered with excellent values, and is likely to win your heart. Natkhat revolves around Vidya Balan that truly understands the meaning of ‘home’ and brings it to your sight through some excellent scriptwriting and portrayal by the cast. However flawed they may be, it’s a film where every character is given the space to exist as individuals with their own story.

So, if we are to get back to those values, then home is where we should start. In a rather unconventional manner, home is where Natkhat does, but with an element of innovation too. Apart from a narrative based on the values that shaped its characters, the plot has several additional details which set it apart from the others, which start on a similar note.

It is also something profound and something difficult to define. It’s how a family treats each other, how children are taught to respect people and follow rules, how people outside the family are treated, how traditions are upheld, and how elders are respected-the overall outlook towards life and careers. This is what ‘value system’ represents.

And yet, we seem to be developing generations of people who disregard their roots and the society in which they were brought up. We’ve seen quite a few young adults who have grown up in very comfortable situations, oblivious to the values that should be instilled in them.

Boys will be boys. Everyone has uttered this line at one point or the other. And, this is how it starts. Trivial issues like pulling a girl’s braids amount to beating their wives in the future. But this is only truly the starting point of the patriarchy when there are no consequences for male misbehaviour at any stage in the cycle. However, for women, it is an endless loop that produces rape culture and justifies it by encouraging them to conform to social norms and curtail their behaviour.

There’s no war between the genders, no overt feminism in the film, and yet Natkhat is a strong film. It uses an unsentimental narrative that accumulates force rather than delivering the message upfront. And it gives us a family that we recognize as time passes by.

There is nothing like going back to our roots; in fact, it reminds us of what’s worth holding onto. In the same way, this movie does this for you. Everything about its production value oozes class and finesse – from the aptly chosen dialogues to the beautiful cast.

It trudges into the shady side of human nature and tries to enlighten the watchers about life’s ceaseless conflicts, confusions, contradictions and complexities. The plot is a testament to patriarchal capitalism’s perniciousness.

It is not a big-budget film, nor is it shot on a fancy camera by a prominent name or an actor who aims to be an international box-office star. It is, quite simply, a 33-minute film where there’s a focus on the basics. For an indie short subject film focussing entirely on the more straightforward, less-celebrated art of film making, it cuts through the layers of entertainment. It gets its message across like no other has done in India before.

Great films are the ones that, with a single, deft move or twist, shift gears by changing the register of its content. That’s what Natkhat does by the midpoint of a nifty little tale that takes off in multiple intriguing directions to arrive at a startlingly grim destination. It’s like the dark centre of the film has been blackened out — you know it’s there, but for some reason, the light won’t fall upon it.

A story within a story is not a new thing in the world of film-making; cinema has always thrived on and out of meta-film narration, looking back at itself and more contemporary stories within tales far older than they are. And I’m glad it is the frame of this film, which ensures its fresh contentment in my eager little head.

There is nothing easy about this film. Its invocation of a past filled with pain and its jump to the present, where most of the primary characters are wallowing in bitter introspection, demand a lot from the audience. The absence of compassion for the victims on screen is articulated by the demure shadow of Vidya Balan, who firmly stands against the misgivings while soothing her son.

It’s a story also of the kind of people we live with, around us, whom we label without really knowing them, and how rushed lives can become instruments of injustice in someone else’s hands. The film excels in showing that detail which small children are sharp enough to observe. But it never goes overboard, allowing just enough realism into its story to make it relatable.

Stream It or Skip It?

The members of a family are not supposed to show up on the screen and act. They have to be developed and painted meticulously through narrative. It is in this aspect that the director: Shaan Vyas, has pulled off an impressive act. Balan’s bahu is a heartening watch that offers a realistic spinoff of the world we live in.

If you want to watch a movie that shows how women are not inferior, I’d recommend Natkhat. Few films show how a woman can teach her son to respect women in the right way, which Natkhat does. It’s a perfect blend of emotions, action and the right touch of feminism.

Natkhat is streaming on Voot.