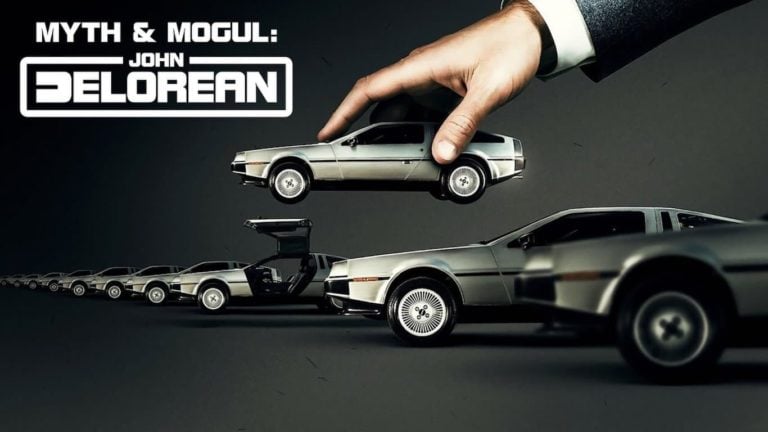 Here’s a snapshot of the story of drug dealing, cocaine smuggling, and millionaire incentives. Fans of Myth and Mogul: John DeLorean might be more than familiar with John DeLorean. The man whose eponymous car company is known for its gull-wing design and has gained a cult following.

The maverick automaker behind the Back to the Future franchise – and the namesake for Netflix’s new docuseries about his life – was arrested on suspicion of drug trafficking and trying to bribe the arresting officer. John DeLorean was acquitted for illegal possession of cocaine in August 1984.

– Myth and Mogul: John DeLorean Review does not contain spoilers –

John DeLorean-Thrust into the Spotlight by his Reigning Successes

What happens when a man with everything turns to crime to get more? Better yet, what happens when we can track the rise and fall of John DeLorean’s life in real-time, from his seemingly sublime moments to his plummeting downfall? This is a question Netflix investigates through the docuseries.

John Zachary DeLorean’s life is the epitome of rags to riches and back again. A true American success story in failure, he embodied his time – glitzy, gritty and fabulous. His cars were a symbol of an era about celebrating youth using a sense of agency and independence.

It’s with this spirit that the show sets out to take a deeper look into the life and times of the man who brought us the DMC-12, which Netflix now immortalized through the docuseries.

Brought to life in the 1980s, thanks to films such as Back to the Future, DeLorean leveraged his way up the ranks of General Motors as an engineer. He innovated some of the most vital vehicles for the company with his ingenuity, including cars like the coveted Pontiac GTO. However, those achievements were overshadowed by his controversial exit from the business – getting fired over allegations that GM mishandled millions in loans it handed him for his DeLorean Motor Company – making way for a remarkable rise to power.

Beneath the Larger-Than-Life Persona of John DeLorean

John Z. DeLorean’s story is one of the most incredible success stories of the 1980s. From his humble roots in Detroit to an industry giant at GM, he overcame seemingly impossible setbacks and was on the cusp of becoming a billionaire in the early days. Adding to his list of achievements, he also nearly changed the course of American history. Therefore, it was no surprise when he found himself mired in the worst scandal imaginable – conspiring to import cocaine.

Myth & Mogul: John DeLorean takes us on a gruelling, deeply depressing, and thoroughly worthwhile journey through the life and times of one of the automotive industry’s most extraordinary self-destructive talents. DeLorean had dreams and aspirations that far outweighed his intelligence and abilities – far beyond those of any other entrepreneur on this list – which eventually sparked off an uncontrollable tar pit of self-destruction that swallowed him up whole.

They claim that, beneath the larger-than-life persona of ‘DeLorean’, there was a charming rogue who stole from his friends, attempted to con significant car manufacturers, and raced in exotic locations while leaving his investors and employees out in the cold.

With so many “tricks” up his sleeve, it is astonishing that DeLorean was consistently caught out – usually by his hubris and miscalculations. The mood of the docuseries shifts with this introduction as you realize that this is not the story of a hero sacrificing himself for vision but a schemer who got his comeuppance in the end, as he had been heading slowly in this direction on an accelerating, lurching path to oblivion.

DeLorean’s schemes are generally carefully thought-out but rely primarily on fooling people with a non-existent deficit of self-knowledge. Here is no Robin Hood resisting the system: he is a man who can charm his way into the pocket of anyone he meets.

These scams, however, pale in comparison to the scandal that was to envelop DeLorean later on, when one of his wealth creation schemes – the trafficking of sizeable shipments of cocaine and marijuana between the United States and Northern Ireland resulted in his arrest and subsequent conviction. This was not a one-off act of desperation: DeLorean had been exploring ways of freeing up large lumps of cash before this venture.

The biggest myth in this documentary is one of omission: what this story misses (and what it probably always will) is the reason why DeLorean committed a crime. After all, most people in the history of American business have committed crimes; we might be living at peak capitalism right now, in fact, but only a handful have been imprisoned because of it.

The question of why we keep returning to this story – whether it’s to pick through the wreckage once more or to offer up a different summation of it – can be answered: John Z. DeLorean is an archetype in American history, and his life story a classic tale of success, failure, and notoriety.

It tells us that even business geniuses can falter, that even brilliant innovations can fail, that status does not protect you from malevolent forces. Even a charismatic man with a courtly bearing can rub people up the wrong way, thus make enemies.

Myth and Mogul: Stream It or Skip It?

This is one of the most outrageous stories in recent American history, involving illegal drug trafficking, government ineptitude and high-level conspiracies. It’s a story about the uncompromising man behind one of America’s most beloved car brands – John Z. DeLorean – and how his unrelenting vision for success led him into some very shady dealings. It’s also a story that solidifies the “American Dream” mythos and proves it can all be eroded by corruption, sordid deals and illicit affairs.

Myth and Mogul: John DeLorean is streaming on Netflix.