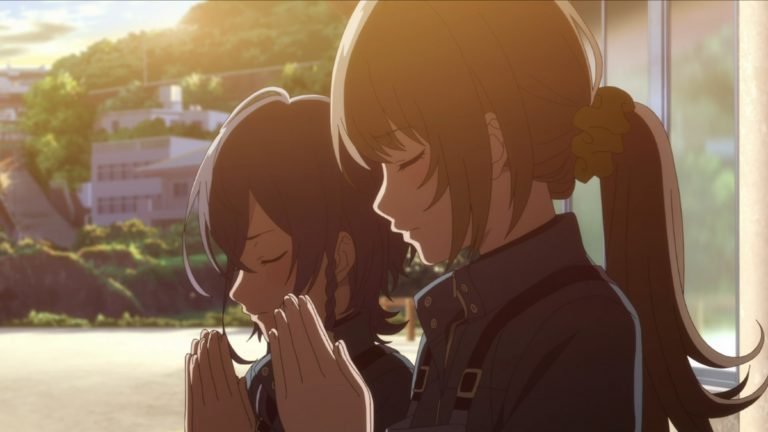 Cue the feels and some tears- the best anime of this season is on another adventure, and I’m taking you all to experience all of that with me. Buckle up, this is going to be good.

The Aquatope on White Sand is the latest anime by the Anime Studio P.A. Works, previously known for producing critically and commercially acclaimed anime like Angel Beats and Another. Toshiya Shinohara directs the series, a director whose career so far has been intrinsically linked with P.A. works, having previously directed Irozuku Sekai no Ashita kara and Nagi no Asu kara for the studio before. It is an original series by P.A. works, which means it is not based on a previously existing property, such as a Manga or a Light Novel.

If you want to know how I felt about the fourth episode of the season, or if you want to catch up on it, check out my review of it here.

How do they keep going this? How does P.A. Works keep making animation that makes my breath go shallow every time I watch it, in every bloody episode? It is supposed to be a two-cour, 26 episode series. How do they manage to do this every episode? How much budget do they have? Is there a trick or two that helps them reduce their effort and budget for each episode? How is every episode so damn beautiful?

The opening and ending themes sound better every time I hear them, and the imagery used in the ending is gorgeous and noteworthy. I have a feeling that P.A. Works is hinting towards something in the ending, but I’m just not smart enough to understand that. I’ll leave that till the end of the series, though. The food scenes, though. If I talk about them, I’ll get hungry and probably take you down with me.

The Aquatope on White Sand Episode 5 – The Plot and Characters

We have come to a point where if you don’t like slice-of-life anime, you will not appreciate The Aquatope on White Sand Episode 5. The story and the world move slowly in Aquatope, and most plot lines can be seen coming from a mile away. To me, that is not a bad thing at all. On the contrary, I would quite like to stay in this world for as long as possible, breathing in the aesthetic and the surroundings. You might disagree, and that’s okay.

Fuuka has finally informed her mother about her whereabouts, and there she comes, trying to take Fuuka back with her to her home. Now, it’s up to Kukuru and the gang to help Fuuka escape this predicament, and help Fuuka they do. The episode is sweet, meaningful and establishes Fuuka’s character as a determined and strong one.

The side characters also had a good showing in this episode, with Udon-chan and her soothsayer mother helping the girls out. Kai also helped, and Kukuru’s grandparents were the superstars of the rescue effort. Overall, The Aquatope on White Sand Episode 5 had a great plot and fantastic development.

This show doesn’t miss. The Aquatope on White Sand Episode 5 was emotional, gorgeous, slow, and a delight to watch. For the love of all that is holy, please watch this show. It deserves so much more love than it gets.

If you liked this review of The Aquatope on White Sand Episode 5, you’ll also enjoy our review of the next episode in the series. Click here to read it!