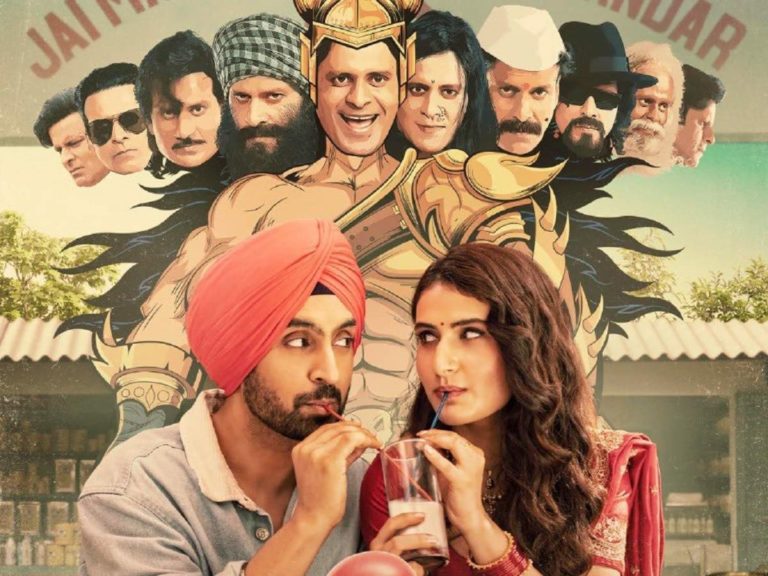 Suraj Pe Mangal Bhari premiered on 15th November 2020 in cinemas and to its credit, the film is the first film to release in theatres after the country-wide lockdown and the subsequent cinema reopening. Directed by Abhishek Sharma and produced by Zee Studios, the film is written by Rohan Shankar and Shokhi Banerjee and stars Diljit Dosanjh, Manoj Bajpayee, and Fatima Sana Shaikh in leading roles alongside Annu Kapoor, Supriya Pilgaonkar, Vijay Raaz, Seema Pahwa, Manoj Pahwa, Neha Pendse, Manuj Sharma and other cast members.

Suraj Pe Mangal Bhari is set in 1995, Bombay. The film’s main theme is love and the disorder and chaos it brings. As the film starts, we meet M.M. Rane (Manoj Bajpayee), a private wedding detective and has caused many men to stay unmarried. However, things take a turn when his detective-self encounters Suraj Dillon (Diljit Dosanjh). He investigates him and his marriage is eventually called off. In the process of seeking revenge, Suraj falls in love with Tulshi Rane (Fatima Sana Sheikh), M.M. Rane’s sister, leading to a catch-me-if-you-can situation.

Set in 1995, you see vintage car shots, old Bombay street recording, landlines, and PCO’s in the film. The film has some cliche comedic scenes but that does not mean that it is not enjoyable. The film is chucklesome but not hilarious and will keep you engaged. Suraj Pe Mangal Bhari is light-hearted and mostly holds to its revenge and love core between Bajpayee and Dosanjh’s characters. In between all this pragmatism, we see Sheikh’s character trying to break free from the stereotype of ‘bhartiya nari’ as she is an aspiring DJ in 1995 and according to the movie the first female DJ of India.

The title of the movie is astronomical as Suraj means Sun and Mangal means Mars but the film is nowhere in those areas. Maybe, the name was decided as a symbolic denotation to Indian marriage and matchmaking system which usually matches the planets and stars of the potential bride and groom and more, or maybe it is nothing but just a name, who knows! Going further, by the midst of the film we know what will constitute the plot – Mangal and Suraj’s enmity and we follow their path!

The film also takes into account OCD but fails to take it seriously, maybe because it’s 1995 and nobody cared about it that much back then or maybe because it was just a plot element. Vijay Raaz’s character is the sufferer here and Suraj uses his OCD to his own advantage to get what he wants. Although Suraj’s intention wasn’t wrong the way he went about it surely was. But all’s well that ends well, maybe?

Suraj Pe Mangal Bhari is not the definition of a comedy movie but is definitely the one you can enjoy while the world is flipping upside down.

A major part of Suraj Pe Mangal Bhari‘s success is due to its cast which pulled off each and every character with finesse and grace!

Manoj Bajpayee as Madhu Mangal Rane is perfect. It is the first time where you see Bajpayee in such a light-hearted role which is away from power-packed action and morals. The film opens with him disguising himself as a lady and was that perfect? Hell yes!

Diljit Dosanjh steals the show here as Suraj Dhillion. His controlled and not-so-over-the-top energy is mood! In certain scenes, Dosanjh steals the thunder of everyone and there is no denying that. Dosanjh’s bubbly self is a star.

Fatima Sana Sheikh as Tulshi Rane plays a commendable role. In Ludo, we saw her taking up a role that challenges her and in Suraj Pe Mangal Bhari we see her doing that again. Her role harbours inner strength and outer beauty which is the perfect match to the idea of Tulshi’s character.

Annu Kapoor as Shantaram Kaka is again flawless and engaging in his bit. Supriya Pilgaonkar as Rekha Rane, Mangal’s mother, yet again brings on screen the perfection she has brought in her works throughout the years. Vijay Raaz as Chinmay Godbole plays a small role but a memorable one for sure as Mangal’s long lost loves husband. Seema Pahwa as Yeshodha Dhillon and Manoj Pahwa as Gurnaam Dhillon, Suraj’s parents, are people who have a sweet and sour relationship which is hilarious and enjoyable.

The veteran cast in Suraj Pe Mangal Bhari adds weight to the storyline and flair to the characters!

STREAM IT! To its advantage, Suraj Pe Mangal Bhari, releasing right after the onslaught of the pandemic, is a film that will ease you back into old routines. It’s not going to get you rolling on the floor, but it can definitely help you have a good time with your family. It focuses on cultural differences a bit too much sometimes, but it is still enjoyable and is a light-hearted entertainer.

Suraj Pe Mangal Bhari is now screening in cinema’s near you.