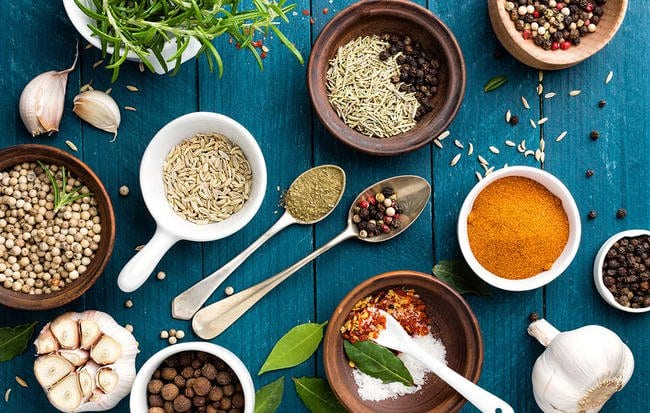 If consumed regularly, certain spices can work wonders for your body and health. Make the most of these immunity-boosting spices and stay protected from infections. Take a look at 7 such ingredients that you can include in your diet for effective results!

Black pepper works as an excellent antibiotic and an anti-inflammatory agent. It is high in vitamin C and antioxidants, which boost immunity and contribute to overall wellbeing. The antimicrobial properties of the spice inhibit bacterial growth and thus help in the prevention of the common cold while improving digestion as well.

Black pepper also protects your body against premature ageing and gives relief from respiratory infections such as sinusitis. Native to Kerala in Southern India, black pepper has been used in Indian cooking since time immemorial. You can use it to season pasta dishes, sandwiches, and soups among many others. It is even used in natural oils and beauty therapy.

Cinnamon comes from the inner tree bark of a tropical species called Cinnamomum, an Asian evergreen tree. It contains cinnamaldehyde, an active compound that helps lower risk factors for pre-diabetes. Cinnamon is packed with nutrients like vitamins A, C, E, and K and shields the body from free radicals. The presence of antioxidants like polyphenols and proanthocyanidins gives a healthy boost to the immune system.

Its antibacterial and antifungal properties reduce the chances of respiratory diseases, keep metabolism in check and help regulate blood sugar. Start adding cinnamon to your daily diet to flavour cereals, bakery items, and drinks. You can prepare cinnamon tea, add a teaspoon into your morning oatmeal/latte, yogurt, or just infuse some with water that you can sip on throughout the day.

Regular consumption of turmeric prevents infection, fights off germs and bacteria, and stimulates the production of antioxidants in the body. The bright color of turmeric is due to the bioactive compound called curcumin present in it. The curcumin compound contains certain healing and anti-inflammatory properties known for enhancing immunity.

Turmeric also contains a compound Lipopolysaccharide that has anti-bacterial and anti-fungal properties. This spice is in almost every Indian dish for its aromatic smell and health benefits. You can also have it with milk (turmeric latte), gravy dishes, stir-fried veggies or to marinate meat along with ginger and garlic.

Regular consumption of ginger helps prevent seasonal infection, chronic indigestion, and boosts metabolism. An effective remedy for cough and flu, you can add this immunity booster to your meals or have it raw. You can marinate your meat, add in curries and stews or make a soothing cup of ginger tea.

Garlic is one of the best-known immunity-boosting spices, rich in vitamin C, vitamin B6 that prevents our body from contracting viruses and other microbes. It has anti-oxidant, antibiotic properties, and also contains allicin (a plant compound) making it act like a germicide.

With its anti-inflammatory properties, garlic helps reduce the degree of cold and flu symptoms and aids in reducing stress and high blood pressure. Often used as an antifungal and antibacterial agent, garlic stimulates the immune system by enhancing the functioning of WBCs. It enhances the absorption of vitamin B1 in the body thereby preventing beriberi.

Although mostly used in Asian cooking, garlic-infused recipes add flavour to almost every cuisine across the globe. It complements savory dishes and can be easily added to your curries, soups, sauces, stir-fried vegetables and consumed regularly on a daily basis. Although in order to make the most of garlic, it would be ideal to consume it in its raw form.

Nutmeg works as an analgesic (pain-reducing properties) during the flu and is soothing for respiratory conditions. It contains anti-inflammatory properties which can help prevent conditions like arthritis, heart disease and promote better overall health. Mostly sold as a ground spice, it contains powerful antioxidants and has a nutty flavour.

Originally grown on the islands of Indonesia, nutmeg is a popular spice used to flavour drinks, desserts, oatmeals, curries, and even eggnog. It also pairs well with savoury soups or cheese-based recipes. You can also add some into your smoothies, lattes, sauces, or a hot cup of milk/tea to give your immune system a boost.

Widely known as the winter spice, clove is grown in parts of Asia and South America and has incredible immunity-boosting properties. Cloves consist of a high amount of antioxidants that shield the body against infections. In case you catch a bad cold, this spice will work as an effective remedy by reducing throat inflammation while helping expel mucus. It’s a common antidote for toothache and is used to get rid of pain during other dental-related issues as well.

Locally known as ‘Laung’, you can use it in savory dishes and to temper your curries and meats to gain the most of its healing and antiviral properties. Clove is also used in the manufacturing of perfumes, toothpaste, cosmetics, and soaps. In the food and beverage industry, it is used as a flavouring agent while making tea or drinks.