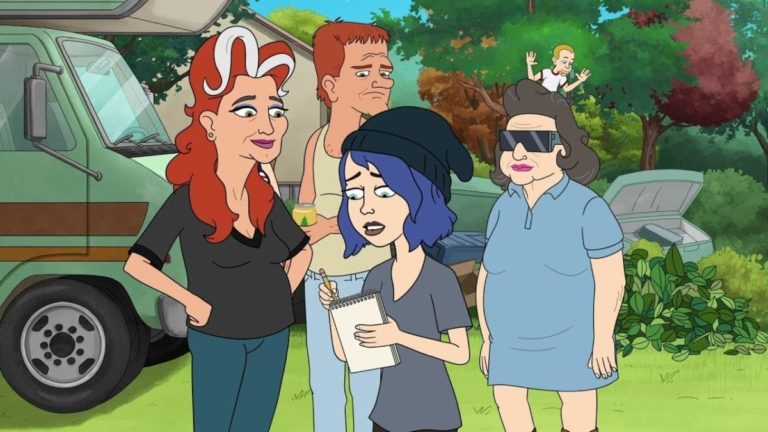 Bless The Harts Episode 18 Spoilers Ahead

Bless The Harts Episode 18 titled Hoot ‘N’ Haw takes us away from the Harts everyday shenanigans and closer to Wayne’s family. Season 2 of the show talks very little about Wayne and his extended family and Episode 18 tells us why. The show is no stranger when it comes to posing a satire on South Americans but here the show takes a leap forward and brings in the idea of generalization in terms of country folks through Wayne’s family.

“With the arrival of European settlers, an uneasy truce was established tween man and skunk. Gifts were exchanged. Treaties were struck… and broken. A feud ignited, resulting in the Battle of Skunktown” – Librarian Denise

Bless The Harts Episode 18 begins like any other day in Greenpoint. Wayne argues with his neighbour over all the stuff she has thrown into her yard leading to an increase in skunk population only to come to know that he owns that extra bit of land that is built on a former Skunk colony and was acquired by a human-skunk truce. Well, Wayne is rich now.

Happy about the land and searching for a way to get rid of the skunks, Wayne along with Jenny, Betty, and Violet decide to stop at a Country Eatery where Wayne’s Meemaw works and it is here we get to hear Hoot ‘N’ Haw in every sentence. Despite Wayne’s inhibitions, Jenny lets the news of his new land, slip to his Meemaw. Soon after, Meemaw, along with the rest of her family and relative,s pull up in her trailer to live with Wayne forming the premise of Bless The Harts Episode 18.

Wayne is ashamed of his family while Jenny is excited and asks him all about his family for the most part of Bless The Harts Episode 18. But this warmth and excitement aren’t here to last long. As Wayne’s family causes a riot as soon as they enter Betty decided to act like an upper-class woman but it only takes her one sip of Wayne’s meemaw’s homemade Peach wine to become one of the country folks. On the other hand, Violet is given the heavy task of handling uncle Tommy who literally chews on everything, kicks everything, and probably has ADHD while she buys a huge list of supplies but he ends up running away!

Again as Wayne tries to handle his family with the sole intention of sending them back, Jenny denies taking no as an answer for anything she desires to do and it is in her this meddling that she gets Wayne involved in a duel which is a serious deal in country culture. Wayne duels with his Grandfather with real guns and ultimately fake loses the duel so that everyone has to leave but he’s a bad liar.

Bless The Harts Episode 18 ends on a happy note with Wayne finding peace and comfort in how his family is. Violet eventually finds Tommy, he’s just happy someone came looking for him for once. The episode tells you that you can choose your friends and lovers, but not family so you might as well embrace it and make the best of what you’ve got.

STREAM IT! Bless The Harts Episode 18 is entertaining and engaging. I am glad the show took a good time to build upon Wayne’s family showing there is more to his world than the Harts and his work. Another positive aspect of the episode is Jenny’s acceptance of Wayne’s family without complaints, it’s wholesome.

Bless The Harts season 2 is now streaming on Disney+ Hotstar.

Read all the other Bless the Harts episodic recaps here, or all of our other reviews here.