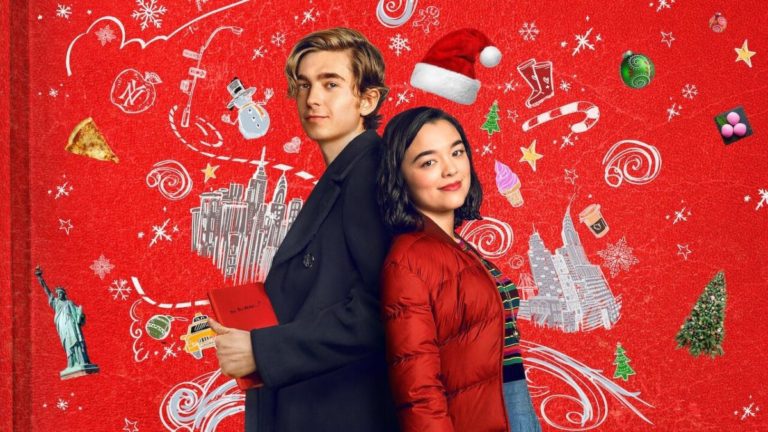 Dash And Lily premiered on 10th November 2020 on Netflix. Based on the New York Times bestseller Dash And Lily’s Book of Dares by Rachel Cohn & David Levithan, the series is created by Joe Tracz and stars Austin Abrams and Midori Francis as the lead pair.

And Dash And Lily Fell In Love…

Christmas is that time of the year when places and people are lightened with love and faith. Warm cookies and rum cakes are made, Christmas trees are decorated and love is in the air, or as Dash says – maybe people mistake Christmas spirit for love. Well, in the end, it’s all about what makes you happy!

Dash And Lily is set in New York around Christmas and the city is in its full charm – snowfall, Christmas trees, carol groups, small fests, and whatnot. We meet Dash first, a teenager who hates Christmas, pretty-much a loner and is visibly reluctant to the enthusiasm. He loves books and we see him in The Strand Bookstore away from all. And later we meet Lily, another teenager who has a Ph.D. in positivity loves her family and Christmas.

She is an old soul, pure-hearted, and loving of the small things about life and seasons. While looking for books, Dash finds a book that reads ‘Do You Dare’ on its cover and inside is a riddle to solve to know who is behind this diary. A secret girl. With a series of truths and dares, heartfelt diary entries, exchange of diary through secret modes like leaving it near a statue, on a random bookstand, and more Dash And Lily fall in love. What follows is their love growing, a few differences, and a sweet, happy ending.

With hundreds of movies based in NY on Christmas eve, Dash And Lily is a bit different from the conventional over-sweet cherry movie soaked in the colours of love with reality locked in a closet. The 8-episode-long series is no fruitcake but a bittersweet chocolate cake that’ll leave a good taste in your mouth and a smile on your face. The series finds its balance in its characters – while Lily is the epitome of enthusiasm, optimism, and love, Dash is the reality of times, the sadness, void, and a few smiles to live by!

Dash And Lily are never in the same room other than when they are but they don’t know as they have been talking through the diary and don’t know how the other person looks. The diary entries are mostly read by the characters themselves, and you can see their affection and understanding growing towards each other and it is adorable and mostly realistic. Dash And Lily is simply about two teenagers who were alone in the season of joy and found each other despite their differences. And Dash does not hate Christmas, he just hates being lonely. After all, they are just teenagers!

Dash And Lily is filled with note-worthy and praise-worthy performance and the star cast fits the whole idea the series aims at carrying forward.

If you’re wondering where you would have seen Austin Abrams in recent times it must be in Prime Video’s Chemical Hearts. I have been a fan of him ever since. Whenever Abrams is portraying a teenager there is something that’ll make you relate to his character. He is amazing and he did it again here as Dash!

Midori Francis as Lily is the happy-go-lucky girl who stays happy no matter how many times she might have been hurt and you will love her character in the series. Dash And Lily go hand in hand and bring on-screen two teenage characters who are real and you must have met someone like them, somewhere!

“Getting to know Midori over the course of filming, she really is Lily. She is that bright and optimistic. She’s as smart and passionate. It really was a case where I felt like we had these actors who sort of embodied the characters in the way you’d see her on the page.” – Joe Tracz, Creator.

Dante Brown as Boomer, Dash’s best friend and confidant, and Troy Iwata as Langston, Lily’s gay brother are two adorable and loveable characters. They are innately nice and humble and nothing seems to change that. They are those people you would want by your side!

Keana Marie as Sofia and Glenn McCuen as Edgar Thibaud, Dash’s ex and Lily’s school-time bully (kind of!) and her first kiss respectively bring the edge to the story without which something would have been incomplete and we might not have even known what. They complete Dash & Lily’s story and are stunning!

STREAM IT! Though Dash And Lily is set in the cliché love-set New York, the idea of the series is feel-good and heart-warming. What if you fell in love with someone with just their words with the world felt stagnant! Well, maybe you just cringed but Dash And Lily is a series that deserves your time with just 8 episodes, each about 26 minutes.

SPOILER: There is a mini Jonas brother Christmas concert in there, get ready!