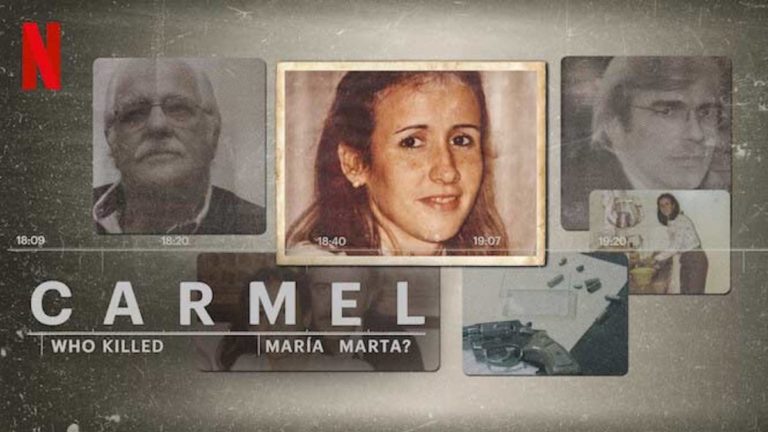 Carmel premiered on 5th November 2020 on Netflix. Directed by Alejandro Hartmann, the four-episode long true-crime series revolves around the unforeseen death of Mara Marta in a gated community in 2002.

A crime that resulted in the Argentinians living in the gated community of Carmel to move away from the rage and violence of the city was the 2002 case of the murder of 50-year-old sociologist Maria Marta. Maria often appeared on her brother Horacio’s TV talk show and led a happy life with husband Carlos Carrasosa but was found dead one day in her bathroom. Furthermore, it was revealed that what looks like an accident might as well be a cover-up for a planned brutal murder.

Like many other true-crime docuseries, Carmel is also embedded with the re-enactment of the case and testimony of eye-witnesses and people close to the family. The case shook people because it took place in a gated community which was so well-protected that even an ambulance had to be checked before gaining entrance. So, for something like this to happen in a place where people moved from Buenos Aires to get away from crime pointed fingers towards the residents of the community, wealthy families of stature and class.

At a certain point in the series, especially in the first episode, there are a lot of testimonies and stories to keep in mind for you to track the murderer later. And it leaves you scratching your head for the truth is baffling. An entire timeline is drawn out in the first episode that can be interpreted in various ways and forms and that is what holds you till the end. The start is slow but the series catches pace real quick.

Things take a turn when it is revealed that Marta was found with 5 bullets loaded in her skull, and the immediate suspect was her husband because no one else could have done the same or had the motive to. The documentary in itself tries to tell the story rather than solving the case and it is here that the viewers hear testimony from not just professionals, but also from people close to Marta. In all this chase for a killer and the truth, the docuseries also raises questions on the class system and its privileges for the upper class.

STREAM IT! There is almost nothing that beats a riveting true-crime documentary with things unfolding and suspects entering every few minutes. The entire idea of not knowing who is responsible for something as heinous as murder is what makes Carmel an engaging and watch-worthy docuseries.

Carmel is now streaming on Netflix.