Leisurebyte DISCOVER THE ART OF PUBLISHING
Home Entertainment Netflix’s Alter Me Review: No Alteration in this Love Story 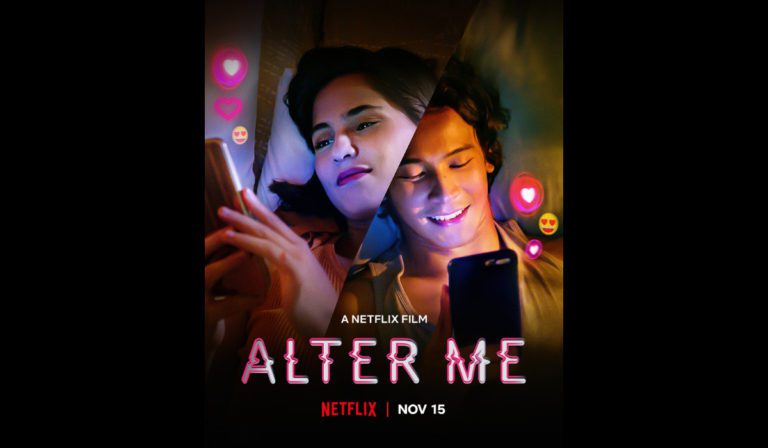 What starts off as a (probably) smart commentary on online culture and the loneliness that it imparts turns out to be just another story about love and relationships. Alter Me tries to be a smart movie about the alternative lives that we live online. It is, actually, based on “alterverse” a sexual haven for Filipino men and women who want to explore their bodies and sexualities anonymously and without any shame. It’s a safe space for people to explore themselves and others, and helps the youth to connect with themselves.

Alter Me follows Uno and Aimee, ex college-mates who meet on the alterverse and start to hang out with each other. Uno, who is an escort, is a serial romancer and falls in love with any woman. On the other hand, Aimee is an HR manager who closed herself up after going through a painful breakup. Aimee hires Uno to mentor her so that she can be closer to her emotions. However, what will happen when he falls for her?

So, Alter Me starts off interestingly. There’s a lot that you expect it to provide, considering it’s about something as interesting as people using an online community to hook up with each other. However, the movie takes a tried-and-tested route after screaming about sex for the first half an hour or so, and then gives us a sloppy romance that we don’t care or need because it’s nothing new.

Let me explain. Alter Me is essentially a romance movie that does not dive too deep behind the “alter” culture. It talks about true love and about letting go of your past. Too early into the movie there is a lovey-dovey montage with the two leads, and the story is very superficial. The conflict, as well, arises too late and it comes and goes too quickly for you to notice or care.

Aimee discusses her potential love life with her ex and takes his advice – the same ex who broke her heart and (almost) destroyed her life. Now, if you’re screaming and asking why, I don’t know. I don’t know why Aimee decides that discussing her future relationship with her ex is a good idea.

On the other hand, Uno falls in love with Aimee too quickly. No, wait. He talks about them falling in love the day after they meet. It’s creepy and weird, and when Aimee rejects her after he professes his love, he goes full-on creepy, repeating over and over again that he loves her. It doesn’t help that we get to see the two of them getting together in the end, because it’s not a love story we are invested in nor do I (personally) endorse. These two people are good friends, sure. But they need to practice some serious self-love before they can do anything else.

As I said, Alter Me’s story is very superficial. Just like Uno, the story deactivates any relationship it had created with the alterverse within the first 15/20 minutes and then gives us a half-baked love story that feels neither fulfilling nor interesting.

The lead characters do not have the depth for you to relate to them, and each gets a scene where they talk about their “feelings”. It doesn’t feel real, not just because the writing is sloppy, but also because the actors themselves do a below-average job at representing these characters. Granted, there wasn’t much to work with, so maybe cutting them some slack wouldn’t hurt. Additionally, they seriously lack chemistry for you to root for them as a couple.

Summing up: Alter Me

Starting off with an interesting premise, Alter Me talks goes down the mushy rabbit hole of romance and love in an otherwise uncaring world. The result is less than engaging, and makes you feel kinda bored at the end. However, if mushy, no-brainer romances are your thing, then this one is maybe right up your alley.

Alter Me is streaming on Netflix.

Liked the Alter Me review? Read our other reviews here.