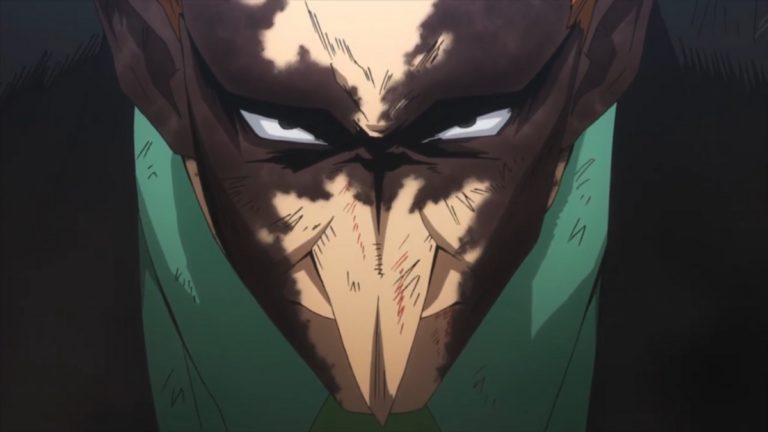 Things come to a boiling point as the League of Villains is cornered by the Meta Liberation Army in My Hero Academia Season 5 Episode 22. Which group of monsters came out on top? Let’s find out in this review!

My Hero Academia is based on the manga series of the same name by Kouhei Horikoshi, and the anime is produced by Studio Bones, a studio that is counted among the absolute top tier of all anime studios. Studio Bones is also known for working on anime like Full Metal Alchemist Brotherhood and Mob Psycho, so you know that My Hero Academia is in outstanding company. Season 5 is directed by Kenji Nagasaki and Masahiro Mukai. If you want to catch up on our My Hero Academia reviews, you can read our review of Season 5 Episode 21 here. This episode is also known as Boku No Hero Academia Season 5 Episode 22 in original Japanese.

Before starting the proper review of My Hero Academia Season 5 Episode 22, let us first look at the previous episode, which we couldn’t discuss because of the “No spoilers for a week” rule I follow. It also perfectly correlates to this week’s episode, so it still works!

The Toga episode of the My Villain Academia arc didn’t work for me for one major reason- Toga wasn’t a well-established character before that episode took place. Sure, we knew about her obsessions and her quirks and why she joined the League, but we didn’t know any of her backstories. We were unaware of why she turned out like that or what really happened to her. By all means, she was just a fan-service character that got screentime because people like yanderes for some reason.

Thus, when suddenly she was thrust into a situation where she got her ass kicked by the Meta Liberation Army, we got the usual trope of “hero gets a power boost after their backstory is explained”. It is an extremely common trope in anime and manga, presented here with a slight twist because Toga is a villain fighting other villains. The problem was that it was so sudden and so unlike her character that it was hard to generate sympathy for her. All of this is separate from the issue of her powers mutating to copy abilities, as well as appearances.

Now, we arrive at the current episode, where My Hero Academia did the same trope to a high degree of success. Twice is a character that has already been associated with the mental issues that make him who he is, and the expansion his power gets is completely reasonable. The episode also did all the events leading towards that happening well, and you begin to ask yourself if something went wrong with the original plans for the Toga episode.

The same thing that caused the last episode not to be as good caused this one to be awesome, which is fascinating. The current arc of the show is extremely interesting because it is a clear departure from the previous patterns of My Hero Academia. There is no way to predict what will happen in the near future because, as of right now, we are cruising in unchartered territories.

Villain vs Villain is also something rarely done with this much detail in anime. There’s a reason for that, though. Villains are rarely explored in as much detail as heroes, thus making an entire arc out of them could lead to disastrous results based on their popularity. My Hero Academia doesn’t need to worry about that, though. It has some great villains that can be a part of a great story if given a chance, just like My Hero Academia Season 5 Episode 22 proved.

The League of Villains vs the Meta Liberation Army is like your local terrorist organisation waging war against Nazi Germany. They are both absolutely horrible scumbags that shouldn’t have been allowed to exist. Your local terrorists might have killed thousands of people themselves, but they at least don’t want the destruction of an entire subsection of humankind, so you cheer them against the Nazis. It also helps that the local terrorists have received tons of tragic backstories to make you root for them.

My Hero Academia routinely produces some of the finest pieces of music the genre has ever seen, and My Hero Academia Season 5 Episode 22 was no different. Studio Bones used a pair of phenomenal original soundtracks in this episode, and the animation shined as well! I have noticed that all the episodes that were released post the movie’s release have been better animated than the previous episodes. If you know what I’m getting at here, don’t worry. There will be an entire article about My Hero Academia‘s movie struggles once this season is over.

My Hero Academia Season 5 Episode 22 was an intense and gripping watch. This season is headed towards a crescendo of chaos, sadness, and catharsis, and I’m here for it.

If you liked this review of My Hero Academia Season 5 Episode 22, you will also enjoy our review of the next episode in the series, available right here!