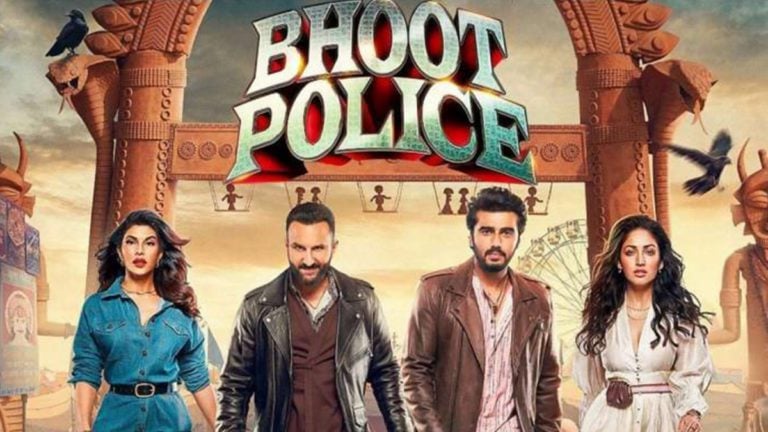 Bhoot Police is a 2021 Hindi language film that was recently released on Disney+ Hotstar. Although the previous date of release was the 17th of September, the movie was released a week prior to this, i.e. 10th September instead. The film stars Saif Ali Khan and Arjun Kapoor as the lead cast, and Yami Gautam, Rajpal Yadav, and Jacqueline Fernandez among other cast members. It is directed by Pavan Kirpalani, who has also worked on other movies in this genre. The film runs for just a little over two hours, but feels much, much longer.

Vibhooti, played by Saif Ali Khan, and Chiraunji, played by Arjun Kapoor, are two brothers who are what one would call ghostbusters or tantriks. While Chiraunji, the younger brother, is dedicated to the practice and wants to carry on the legacy of their late father Ullat Baba as one of the most famous ghostbusters of his time, Vibhooti is just in it for the money and the women. He doesn’t truly believe in the existence of ghosts or haunted mansions.

The brothers are hired by two, now bankrupt, sisters whose mansion in the hills is apparently being haunted by an extremely powerful ghost. Will Chiraunji maintain the family legacy or will this exorcism go horribly wrong?

Disney+ Hotstar describes it as:

Two brothers Vibhooti and Chiraunji have ‘fought’ their share of ghosts. However, a new case forces them to rethink their own abilities and beliefs.

Via the Disney+ Hotstar Official Site

– This Bhoot Police review does not contain any spoilers –

Bhoot Police easily falls into the newfound horror/comedy genre and so it was quite inevitably going to be compared to the 2018 film Stree by Amar Kaushik. Viewed independently, Bhoot Police performs only decently as a comedy film and poorly as a horror movie. When compared to Stree, it does even worse. Even after a spectacular performance by most of the cast, especially Saif Ali Khan, the film is only so entertaining.

Dialogues are poorly written and the one-liners get cringy pretty soon. Aside from all that, the film is overly reliant on the cliches of its genre. It is like they tried so hard to make it scary and put in everything you think you’d find even a little bit creepy. Well, that didn’t work and the film definitely didn’t scare me or even unnerve me enough for me to think it does justice to the cliches.

Also Read: Amazon Prime’s The Voyeurs Review: Might Make You Dreadful After Watching It

A saving grace for Bhoot Police is its cinematography and set design. You can see the eye for detail and the care that must have gone into every shot and the setup for it. The film is visually quite interesting, even if there is only a limited plot to carry it through.

Bhoot Police is only enjoyable if you go in with zero expectations, and it is still only mildly bearable. The comedy quickly turns cringe and the jump scares can only do so much. It’s a film made to appeal to the masses because of big cast names and frankly, the film does them no justice. A better bet? Watch Go Goa Gone instead.