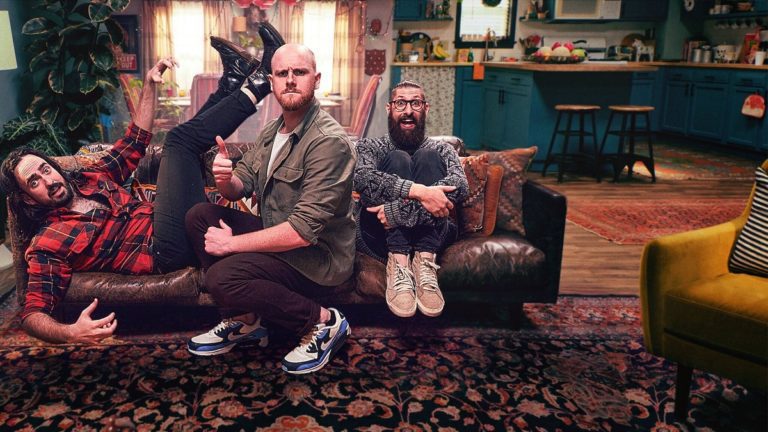 Lately, we’ve been seeing a lot of comedy series trying to make their way online and failing miserably. Then here we get a big surprise by Netflix in the form of Aunty Donna’s Big Ol’ House of Fun and we don’t know how to react.

Aunty Donna’s Big Ol’ House of Fun is a comedy sketch series which is divided into six parts. Sketches are something that is not understood by most of the audience but it is a pleasant surprise to see a sketch comedy was able to make its way to the heart of Netflix and entertain a wide range of audience. It was very similar to the way The Lonely Island tried to dominate Saturday Night Live.

The Aussie trio Mark Samual Bonnano, Broden Kelly and Zachary Ruane have been making absurdist comedies for years now and now they have combined their talents to make Aunty Donna’s Big Ol’ House Of Fun in which the three of them are actually Aunty Donna. It also features various celebrities in each episode.

The Netflix delight opens with a song ‘Everything’s a drum’ and if you clearly notice, it is like an introduction to the whole series because you will see how absurd, fun, novel and dramatic it is going to be from now. Aunty Donna’s Big Ol’ House Of Fun is filled with loud noises and expressions. Also, head-on, we see that just changing the name of the Wi-Fi grabs the attention of the entire neighbourhood and Jerry Seinfeld. The silliness of this scene prepares you of the silliness ahead.

It not only includes silliness but also art writing and various parodies. One of the longest parodies they performed was of The Ellen DeGeneres Show which unexpectedly keeps going on and on. They make such a big deal out of the show that it actually makes you laugh at the absurd comedy that they are willing to pull off to make a point. Also, their executive producer ‘Ed Helms’ will be known as ‘Egg Helms’ after this show.

The good thing about the show is that there are no explicit visuals. If they would have used any, it would’ve looked unnecessary. Another good thing is that each of the characters has their own charm. The three of them have a very different set of qualities. They are very different in dialogue delivery, face expressions, body language and react differently to situations. This makes the show more interesting.

Overall Aunty Donna’s Big Ol’ House of Fun stands at an extreme point where you can either love it or hate it. It’s difficult to hold a middle ground with such a script. So, if you are acceptable to new things and like absurd comedy then this is definitely the show for you. If not, then giving it a chance might just change your mind.