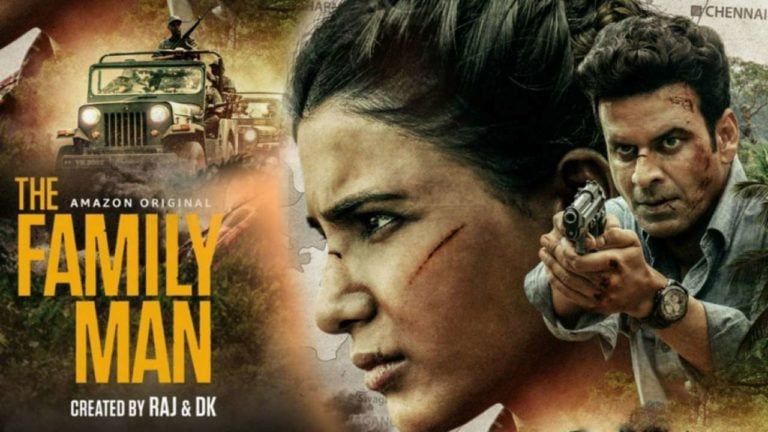 Ever since The Family Man S2 was announced, fans eagerly waited for the second instalment of the action-thriller. But after an indefinite delay announcement and social media outrage requesting a ban for the series, The Family Man 2 finally made its way to viewers. Raj and DK, as creators of the show, have brought together a power-packed cast ensemble and a kickass storyline. It is embedded with emotional turmoil, rebellion, trauma, gunshots, and more. There are close to zero disappointing moments in the series whatsoever.

We see antagonists from The Family Man season 1 indicating that there is some unfinished business and no matter what it takes they’ll finish it. In The Family Man S2 we see Srikant out and away from the Taskforce pursuing a corporate job that neither brings him satisfaction nor peace. It is soulless and more often than not he is seeking updates about new tasks from his best friend JK. On the other hand, Srikant’s married life is going through a rough patch as we see him and Sushi seeking couple therapy to mend their damaged relationship.

FOMO and circumstances force Srikant to join back the force. And soon after he heads to Chennai for a task. It seems as if Tamil rebels have joined hands with the remaining force of Mission Zulfiqar. As the series continues we seek answers for questions like who are these rebels and who is this unstoppable rebel – Raji; what is their mission and motive; what past oppression holds them together; will Srikant be able to save his country and his family and more.

Before the show was even released people were quick enough to assume and lash back at creators and the actors for they believed the show was against Tamil rebels who fought for Sri Lanka and portrays them as terrorists. Twitter flooded with hashtags like #FamilyMan2_against_Tamils. To judge a creative project without even seeing it and assuming that the creators have malice in their intentions is a detestable sight. The same happened back in 2018 with Padmaavat and later it was revealed that the film only praised the Rajput power and moral ground.

The Family Man 2 treats this issue and the difference between the two states with utmost sensibility and sensitivity. The second season is nuanced, layered in its narrative, and offers a clear picture of the character’s situation without victimizing or blaming anyone for no valid reason. The Tamil rebels are not shown as terrorists or people who have no motive and function primarily on hate. Instead, they are portrayed as humans who have suffered immense loss and trauma to come down to this stage where there is just rage and sadness that consumes them with a want for justice.

The writers and creators of The Family Man S2 have done a tremendous job in terms of portraying regional communities steering away from cliches. The language in which the dialogues are spoken is given attention to and there is often a change of accent as we see people from different region conversing. This, in turn, elevates the series and its subject matter. Furthermore, despite its fast and hard-hitting mission and gunshots, the series does not miss out on giving its viewers poignant, heartwarming, funny, and emotional moments ultimately leaving an impact on the viewers.

The cast of the series is so well-placed and thoughtfully cast that not even once do you feel that any character is not bringing justice to their roles. The banter between JK and Srikant is priceless, it often induces laughter and adds a sense of wholesomeness to their bond. Additionally, Atharv, Dhrirti, and Sushi add more weight to the family dynamic of the show and even in scenes that aren’t exactly connected with the main storyline, these characters add value and core to them. Dhriti does her job as an angsty teen role amazingly. I also loved Abhay Verma as Kalyaan/Salman.

On the other hand, Raji’s character is as complex as it is believable, and Akkineni is spot-on from the onset. The filmmakers take their time portraying her personality and motivations. Even with simple gestures, body language, and fewer sentences, she manages to keep up. Nobody is in a rush, which leads to Raji offering one of the best character arcs here. Her sheer presence instils fear, and she speaks with her gaze. A calm and steady appearance to conceal the piercing cries of pain that keep her awake at night. Akkineni does an excellent job depicting this dichotomy in The Family Man S2.

Summing up, The Family Man S2 brings the entire cast and storyline together so well that some mistakes that one might notice are negligible. Bajpayee as Srikant is flawless here, we see his vulnerabilities in this seasons in terms of his family and it only strengthens his character. The scene where Srikant loses one of his closest teammates and wants to break down but holds it all back is one of the most powerful and heartbreaking scenes in the series where Bajpayee brings finesse to his role.

STREAM IT! The Family Man S2 is a gripping series and is better than the first season! After the cliffhanger, the series ends with there will be The Family Man 3 soon and we are all in for it!